Relocation of presses as a team effort

Concentrated know-how was demonstrated by the Felbermayr subsidiary Wimmer during the relocation of a press for the production of steel rims for the automobile industry. The Wimmer employees received support in terms of transport logistics from colleagues from the other Felbermayr subsidiaries Bau-Trans and Haeger & Schmidt. The project was

completed in August with the commissioning of the 830 tonne press in Troyes, France.

During this project, from dismantling to assembly in Troyes, we had virtually every screw and electrical cable of the press weighing around 830 tonnes in our hands," says project manager Jürgen Nawijn, summing up the relocation of the press. The 55-yearold project manager from the Wimmer branch in Krefeld went on to say that it is therefore also worth mentioning that around two thirds of the scope of work was dismounting and mounting work, including electrical and hydraulic installation work. If one also takes into account that only about seven months passed between dismantling in Ebersbach (Germany) and commissioning in Troyes (France), the time-efficient work of all those involved in the project becomes clear.

The project planning for the relocation of the steel rim press was started as early as summer 2019. The provision and activation of the required equipment followed in January. Nawijn adds: “For the relocation of the assembly equipment alone, about twelve truck transports with about 200 tonnes of equipment were necessary. The dismantling of the system peripherals was then started in January. The heaviest components were the press base and the press head, weighing 130 and 150 tonnes respectively. These were dismantled using a 1,000-tonne lifting frame and loaded onto low loaders. All in all, about ten more abnormal loads had to be organized to relocate the press from Ebersbach to Troyes, some 200 kilometres south-east of Paris. All this, however, had been carried out by his colleague Mark Schellerer in cooperation with the sister companies Bau-Trans and Haeger & Schmidt.

By the end of March the main components such as the press foot, head and the two rams had arrived in Troyes. The moving in was realised by means of what is known as a Sefiro (self-propelled industrial scooter) and a lifting frame. “To do this, we drove under the lifting frame with the low loader and the load, so we could lift the load with the lifting frame,” explains Nawijn and goes on to describe how the Sefiro then drove under the load instead of the low loader. The lifting frame was then mounted on a rail system in front of the press foundation and driven underneath with the Sefiro. Subsequently, the components were then completed and lifted up again, moved to the installation site by means of a rail system and set down. With the exception of the press head, this was no great challenge for the experienced fitters. With the 180 tonne press head, however, it did take a little longer  due to the installation height of 6.5 metres. “Thanks to the excellent equipment, there was no problem at all,” says Nawijn, and so the box of tricks was left at home. Following the rough assembly, the peripheral parts were installed, including the connection of electrical and hydraulic components. The client for the project with crosscompany collaboration was Accuride, a US manufacturer of wheels for the automotive industry. 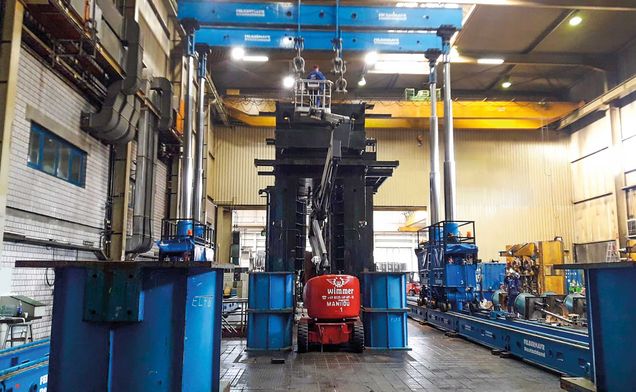 The disassembly and reassembly of the main components was carried out using a lifting frame with a lifting capacity of 1,000 tonnes. 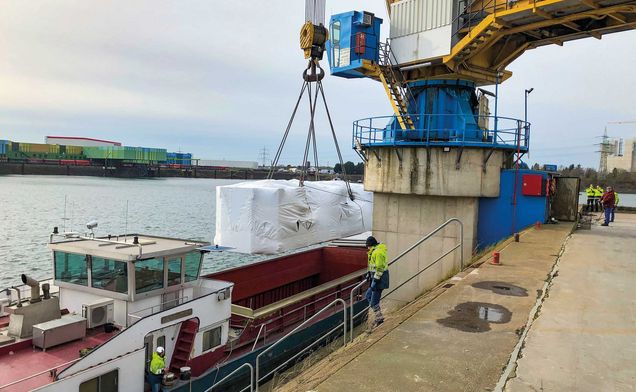 Transportation by water was carried out by Haeger & Schmidt.
Back to all news