In July, the abnormal load - consisting of a 55-tonne motor component - set off from Augsburg in Germany and arrived in Melilla in North Africa, where it enabled the production of electricity. This particular transport was unusual because it was a race against time. The component had to reach its destination and be installed as quickly as possible, otherwise there was a risk of capacity bottlenecks in the power supply at the destination.

At the start of July, Marc Schellerer received an urgent request from MAN Energy Solutions in Augsburg. The order: Development of the fastest possible transport concept for a 55-tonne crankcase from Augsburg (D) to Melilla on the North African Mediterranean coast with subsequent assembly. For the sales manager of Felbermayr’s international heavy transport division, this was a “time-critical challenge”, especially as the bidding period for such a complex project was extremely short.

For Schellerer, it was instantly apparent that transporting the abnormal load by road was not the solution in this case: "It would have taken about ten weeks to get approval for road haulage in France," Schellerer explains. Special transport of the load over the distance of around 3,000 kilometres from Germany, via France to Spain, to North Africa could therefore only take place by plane. The solution was finally found in the form of the cargo aircraft "Antonov 124-100".

Setting off from the MAN plant in Augsburg, the engine component (roughly eight metres long and over three metres wide) was transported on a low loader to Munich airport.

Following arrival, the project participants were immediately able to make the most of the flexibility of the Felbermayr subsidiary Wimmer, based in Sulzemoos, to the north-west of Munich - because the charter plane was delayed by six hours. This threatened to put the further course of the transport at risk. However, thanks to the quick action of the Wimmer employees and the Antonov crew, as well as the support of the airport staff, it was possible to load the aircraft and make it ready for flight within just four hours using a mobile crane supplied by Wimmer. This meant the team could make up for lost time, and the plane with its precious cargo landed at the Spanish airport of Malaga just a few hours later. Transshipping onto a low loader then took place, followed by road haulage over roughly 100 kilometres to Motril. Once in Motril, the abnormal load was fortunately able to make the connection with the twice-weekly RoRo ferry (from the English phrase "Roll on, Roll off") between Motril and Melilla. The crankcase - pulled by a three-axle heavy-duty tractor, on the six-axle semi-low loader - therefore rolled onto the ferry as planned. After reaching the port of Melilla, the last leg of the journey consisted of little more than one kilometre to the power station.

​​​​​​​The project became an example of perfect teamwork thanks to the new Felbermayr Engineered Solutions division. Working together with the colleagues from Wimmer, the defective crankcase was removed and the new one installed within just ten days. "A lifting frame was used for the transshipping process, while the disassembly and reassembly of the 55-tonne high-tech component required the use of a Sefiro (note: self-propelled industrial roller) as well as extensive expertise and teamwork," explains Schellerer. Together with his colleagues, he is very happy to have completed the job successfully and according to the mantra "everything from a single source". The recipients were also delighted, because the successful transport and installation of the diesel engine crankcase meant that the power generator could resume its operation – the power supply in the region was secured. 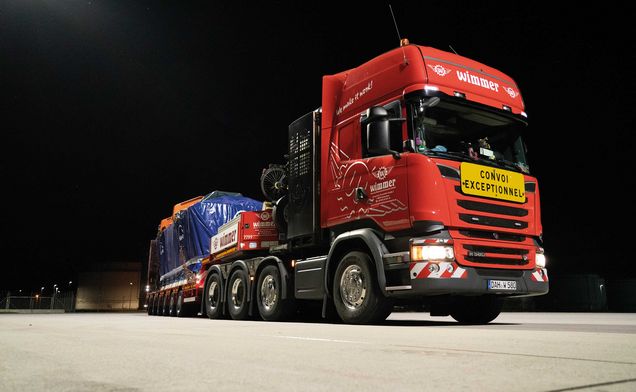 The first leg from the MAN plant in Augsburg to the airport in Munich was carried out by the Felbermayr subsidiary Wimmer Maschinentransporte. 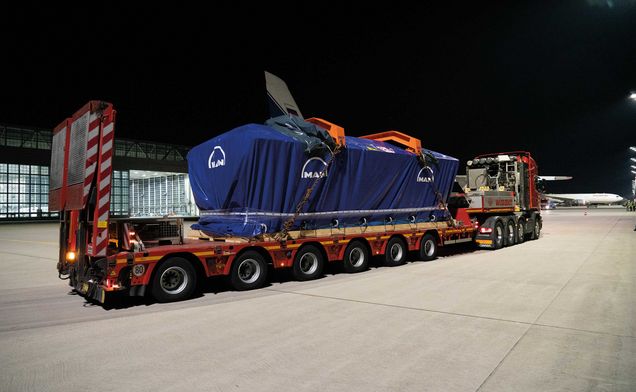 No traffic-routing measures were required for transport on the six-axle low loader. 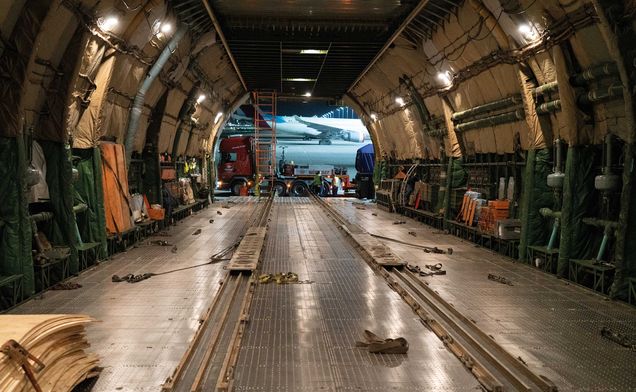 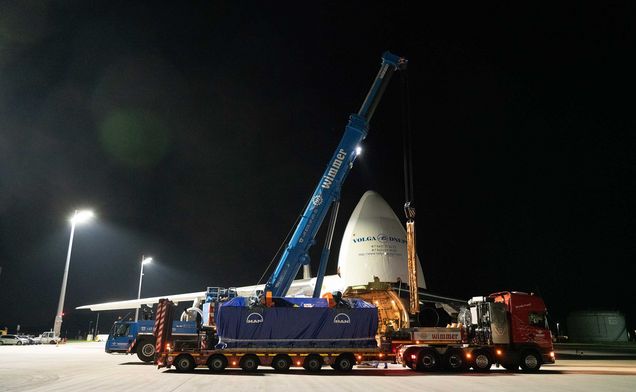 Starting from the MAN plant in Augsburg, the engine component, which is about eight meters long and more than three meters wide, was transported on a low-loader to the airport in Munich. 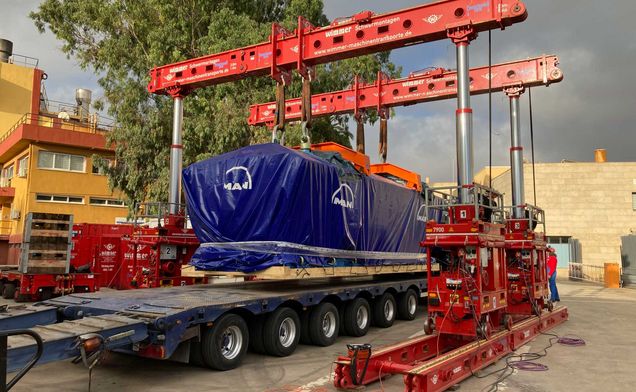 In cooperation with colleagues from Felbermayr's Engineered Solutions division, the defective crankcase was removed and the new one installed. For this purpose, a lifting mast for handling and a self-propelled industrial scooter were used.
Back to all news